Checkout Our Sales, Promos, and Discounts here! Use Promo Code NY22 at Checkout

Get the best deals on AST Suspension

ModBargains is an authorized dealer of AST Suspension

Suspension is one of the biggest impact upgrades you can do to your vehicle. Ride height makes a huge visual impact, and changing spring rates and dampening has a huge impact on ride quality and handling. We always recommend that our clients pick a quality suspension system when looking to lower their vehicle/upgrade their suspension.

AST & Moton are world renouned in the world or motorsports. They offer the same technology used in their race winning suspension systems in their street focused systems.

The company was founded in 2000 by Piet Kreeft and Peter Smits combining their expertise to innovate and manufacture new suspension systems. AST made its name through unparalleled quality control and manufacturing flexibility, setting them apart from many other companies in the suspension industry.

With over 2 decades of experience with companies such as Koni and HI TECH, Kreeft and Smits have deep roots in the suspension world as well as motorsports. Working with race teams in WRC, Dakar Rallies, Indy Car, and many other Kartcross and Touring car events, both bad a wide knowledge of performance suspension tuning.

In 2011 AST purchased MOTON Suspension Technology. MOTON is a renowned damper brand founded in 1999 that develops, manufactures and markets a full range of high quality, state-of-the-art adjustable dampers. By 2000, 30% of the starting field in the 24 hours of Le Mans were equipped with MOTON dampers.

Both AST and Moton have become providers of high performance shock absorbers used by many prominent manufacturers and racing teams worldwide. MOTON’s applications are mainly used in GT and Touring cars as well as in high-performance street cars while providing user-friendly and efficient technology.

AST designs their suspension systems with the focus on strength, reliability, and performance.

Most AST and All MOTON Dampeners utilize a mono tube design with high quality, low friction seals and bearings. This design offers cavitation resistance and control over larger oil flow and damper movements.

Inverted Piston design and External reservoir on AST high end systems both increase damper strength in all directions as well as help eliminates overheating and cavitation. 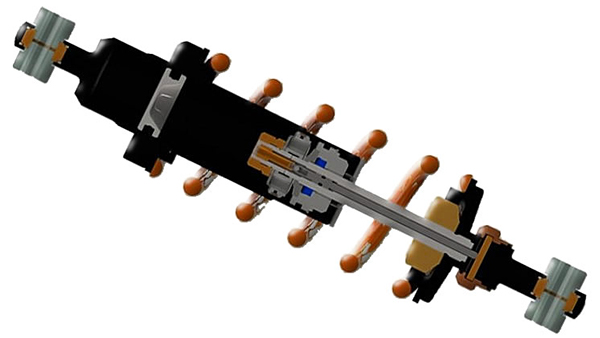 Where do you want to Finish?

AST & MOTON Suspensions were bred through motorsports and competition. Many professional races have been won on MOTON dampers such as the FIA GT and FIA Sportscar Championship, FIA ETCC and FIA WTCC Championship, Grand-Am and World Challenge Championship, and as well as numerous National GT, Touring and Club Racing events all over the world.

So when it comes time to pick the right suspension for your vehicle, it is important to ask yourself...Where Do You Want to Finish? 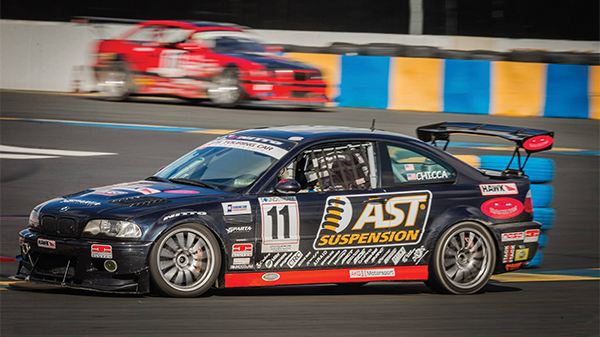 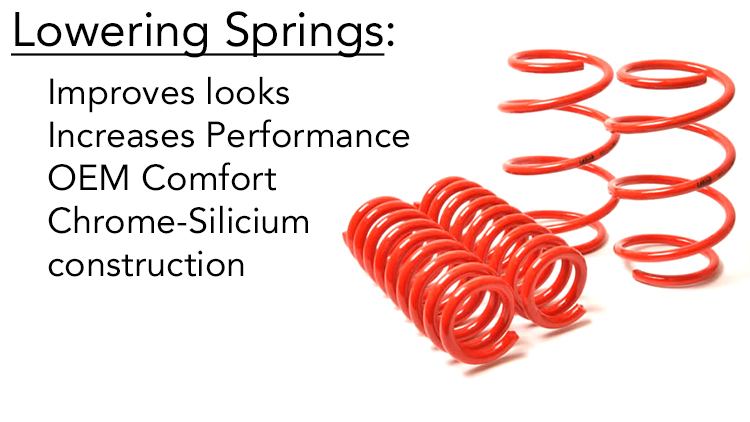 Looking to lower your vehicle but aren't ready to do a full coilover setup? The AST Lowering Springs are the perfect option for you. Lowering Springs are very cost effective and maintain a comfortable ride for the daily driver. These are especially popular for vehicles that come with adaptive dampeners from the factory.

AST uses high-quality springs made of chrome-silicon steel that are vehicle specific and adjusted to the respective standard suspension dampers and wheel loads. These spring kits are developed to perfectly harmonize with your factory dampers so you don't compromise performance, ride quality, or shock longevity. 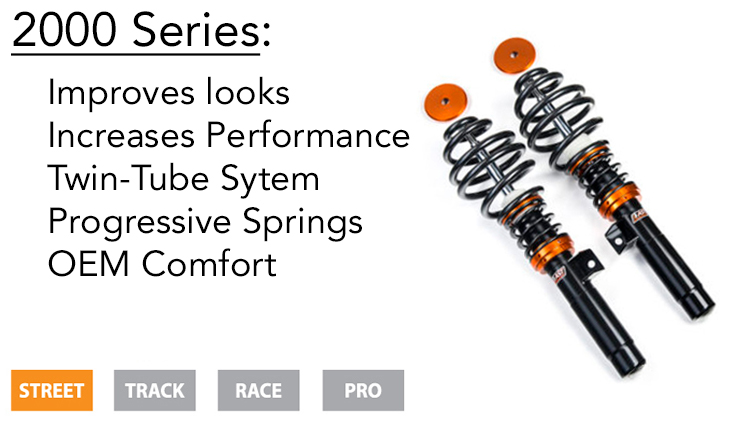 Looking for an above entry model coilover for your street driven vehicle? The AST 2000 Series is a great option. This complete coilover system has height adjustability and optimally tuned non adjustable dampers. Perfect for those looking for more performance than lowering springs but are looking for something a little more budget friendly.

The 2000 Series offer a comfortable and sporty ride while giving you the ability to adjust the ride height of your vehicle. These coilovers offer the same high quality construction as their top of the line coilovers offering your the best in Strength, Reliability, and Performance. 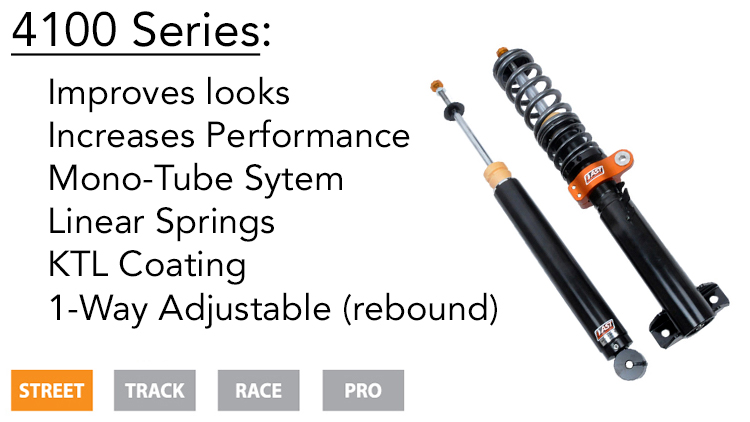 Need more performance? The AST 4100 Series coilovers are the next step up when considering a performance suspension. They still offer great driving comfort but with a more performance tuned design than the 2000 Series. These are great coilovers for the performance minded enthusiast that wants a little extra adjustability, but doesn't want to get too deep into fine suspension tuning. 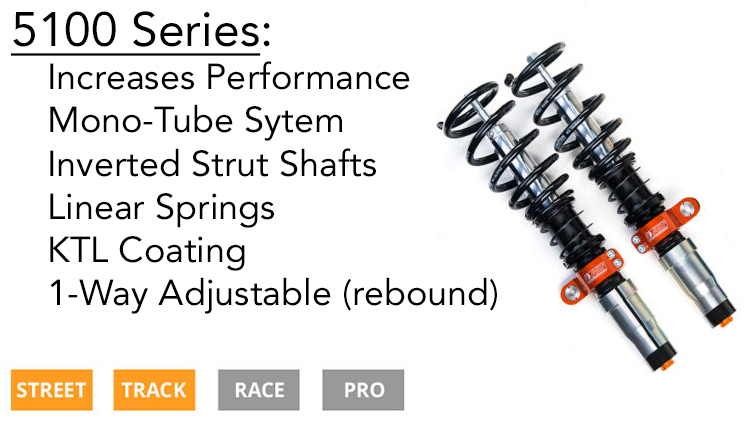 Ready for the next level? The AST 5100 Series coilovers are the next step up when considering a performance suspension. They still offer great driving comfort but are definitely track focused. These are great coilovers for the performance minded enthusiast who tracks their car occasionally, but doesn't want to get too deep into fine suspension tuning.

The 5100 Series feature full height adjustability with damper tuning aimed at performance driving, occasional track days, and a civilized ride. The monotube dampers are invert mounted for improved strength and the rebound adjustability allows for more tuning to your desired performance level and driving style. Like the 4100 Series, the 5100 Series features improved corrosion resistance with AST's KTL Coating. 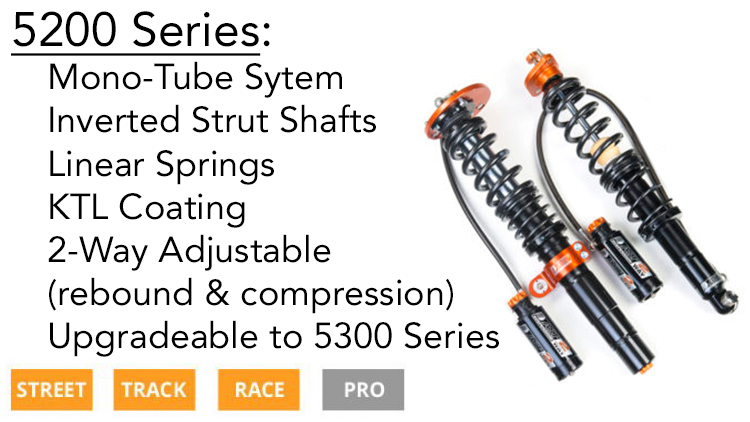 Are you serious about racing but still want to be able to drive on the street? The AST 5200 Series might be the coilover for you. The 5200 Series offer race technology in a well mannered street package. This fully adjustable coilover is geared towards the track enthusiast and amateur racer. It features the same technology as their full race setups with a little less adjustability (too much adjustability can get pretty complex to setup correctly).

The 5200 Series feature full height adjustability with damper tuning aimed at very high performance driving with a track use and racing focus. The dampers independent rebound and compression adjustability allow for a wide range suspension tuning. The dampers are invert mounted with remote reservoirs for improved strength and feature AST's KTL Coating for long term durability. 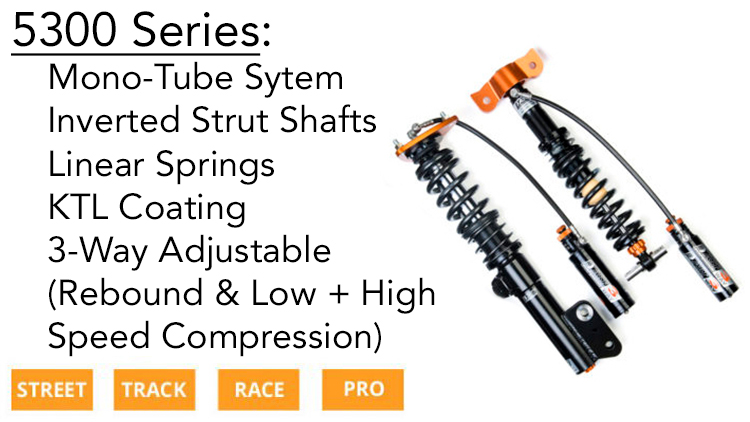 Because Racecar! Yes, these are race coilovers and some of the best you can get in this price range. THE AST 5300 are designed for the best performance on the track. High durability/reliability means low maintenance during racing season, and 3-way adjustability means more fine tuning for different tracks and conditions.

The 5300 Series feature full height adjustability with damper tuning setup for racing (but can be fully customized). The dampers are invert mounted with independent rebound and compression (Low & Hi Speed) adjustability and a remote reservoir. The coilovers also feature spherical mounts and bushings for improved performance and feedback. The coilovers are fully serviceable and rebuildable and utilize AST's KTL Coating for long term durability.