KW installation + Review
First of all, I want to give a GIANT thanks to Jason@ModBargains. He gave me a crazy deal on these Variant 1's. My struts and coils were all original from 2001, and were starting to sound pretty sketchy, so instead of paying 750 for just the rear struts I instead picked up these KW E46 Coilovers. Here's what they looked like upon arrival: 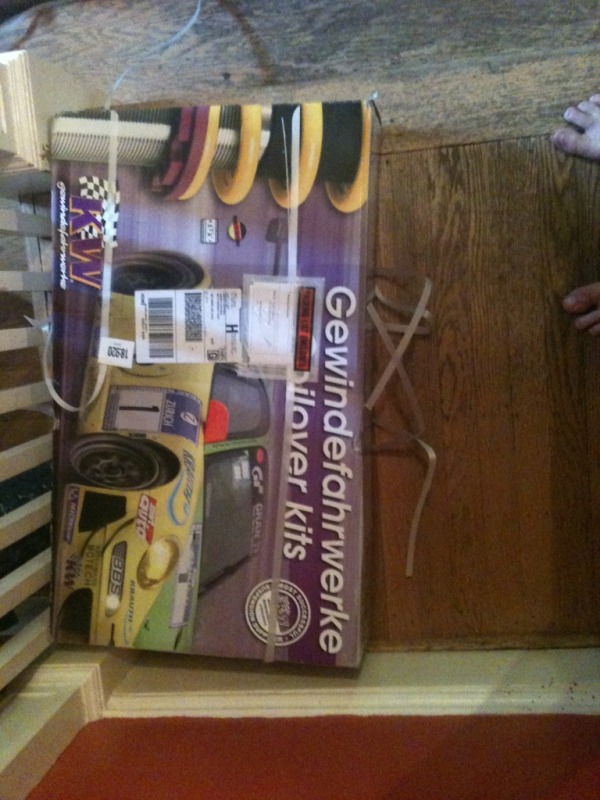 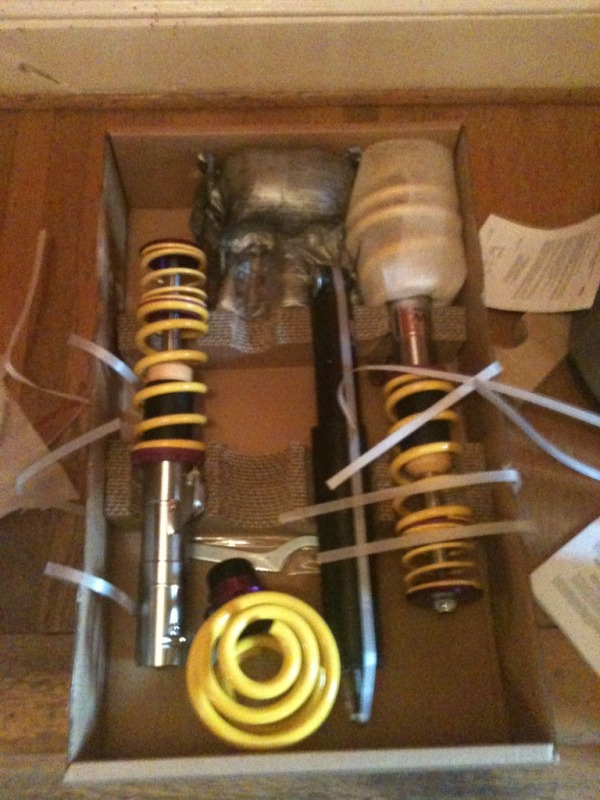 A: Removal of original struts and springs
So first things first, make sure you have all the tools. I didn't have them all, and since I worked all summer, this project (including CV boots, tie rods, and end links) took around 2 weeks. The rear is way easier than the front, so I decided to begin with the front to get it out of the way. This way the rears are ridiculously easy.

Tools:
floor jack
jack stands
OEM jack
wheel blocks
breaker bar
tie rod puller [get this, or you will have to replace your tie rod assembly after you break the bushing with a pickle fork]
torque wrench
spring compressor [recommended but not needed]
rags
string, wire, or a bucket to rest your wheel hub/control arms on
latex gloves
T-45 torx socket
1/2"" drive socket wrench
13mm,18mm,22mm sockets

FRONT STRUT/SPRING REPLACE
Begin by breaking the lug nuts on both front wheels while the car is on the ground. Engage the e-brake and put wheel blocks behind the rear wheels. Look under the front of your car, and if you are lucky, you will see this guy: 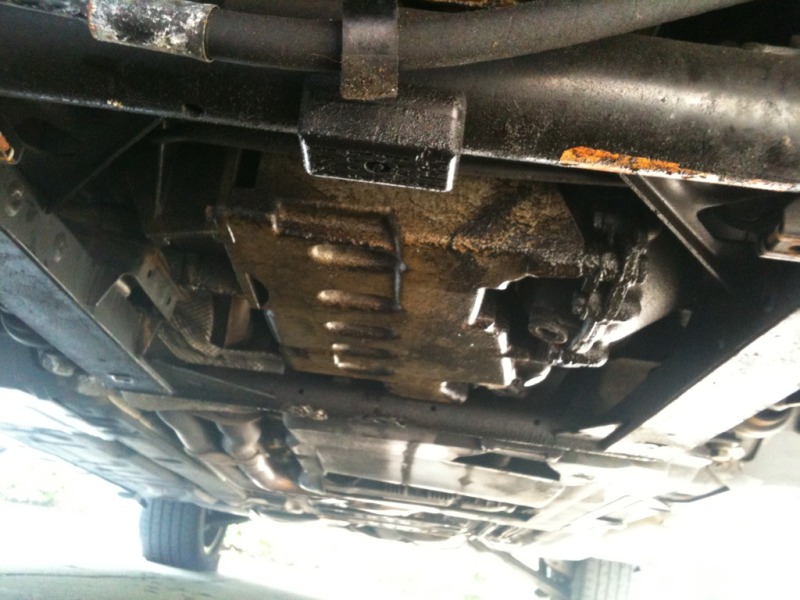 Put your floor on that jack pad and jack it up. Put your jack stands under the side skirt jack pads and lower your car onto them. I kept my floor jack engaged in addition to the jack stands just to be safe and I recommend you do as well. Now remove your wheels and put them flat on the ground under your side skirts between the rear wheels and jack stands. Again, just in case.

Remove the outer tie rod nut with an 18mm socket. Use your tie rod puller to remove the tie rod end from the wheel hub. Please use a tie rod puller. I used a pickle fork and ended up breaking my tie rod bushing. As a result, I ended up buying two new outer tie rod assemblies. If your outer tie rod adjustment nut is seized, buy new assemblies as you will need to in order to get your alignment done. Plumbers torches DO NOT work. It cannot get it hot enough. It has to be literally red hot  to budge. Here's how I got mine off: 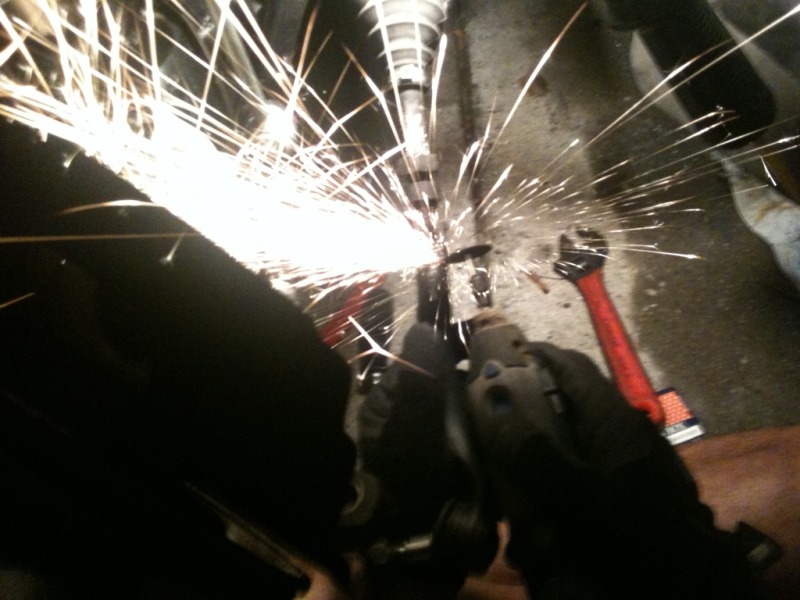 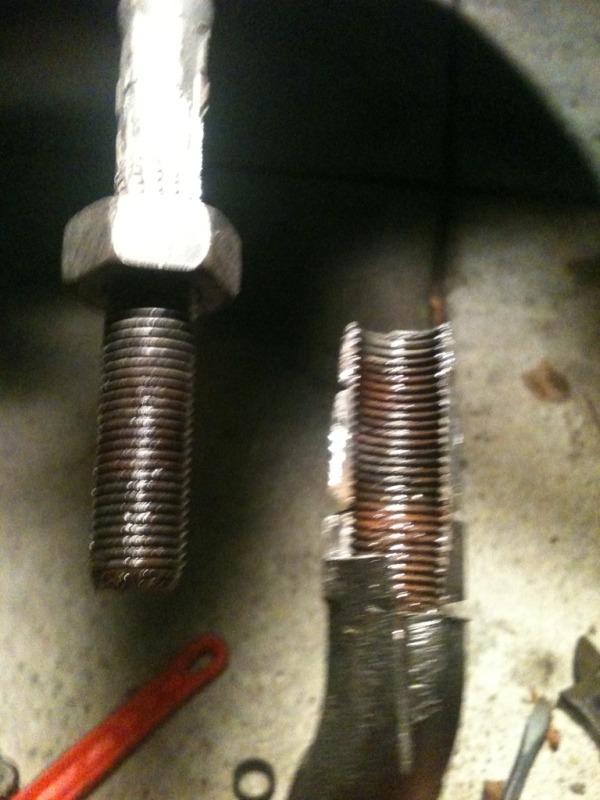 If you bought new tie rod assemblies, scroll down as I cover it later in this post
Now it is time to remove your sway bar end links. Do this after you remove the tie rod because that allows you to freely turn the strut to gain access to the top nut. Grab your 13mm socket and break the upper end link nut that is connected to the strut. You will notice that the center will spin inside of the joint, so after breaking it, put the T-45 torx into the center to hold it while you unscrew the 13mm nut.

Next look to the bottom of the strut and find the 18mm bolt holding the brake line and sensors as well as the wheel hub to the strut. Break this guy and take it out. Be careful, ass the wheel hub may fall down. Mine did not. I had to hit it with a rubber mallet to get it off. Support this with a bucket or wire.

Open the hood and locate the top of struts. There are 3 13mm nuts holding the strut and strut mount to the car. Remove these while holding the strut with your other hand as it will fall out! You should now have this:

I bought new front shock mounts, but regardless you need to disassemble the old spring from the shock to get the factory washer in between the top spring perch and the shock mount. Now when I told my mechanic that I was going to be removing my springs, he lectured me about losing my head and or denting my car if I used the spring compressor incorrectly. Well I ended up compressing the first one, but on the second one, I simply went into my back yard next to my garage wall made of bricks. I put the strut on its side and stepped on the base of the strut. After unscrewing the top with a LONG socket wrench, it just popped off and shot out about 4 inches in the grass.....no big deal. I did loose the original nut though. This ended up being a problem, because the nut supplied with the KW's was one size bigger and it wouldn't fit into the center of the shock mount. So i bought a slimmer 22mm socket. Now take the washer and put in on the new coil and then put on the shock mount. It should look like this: 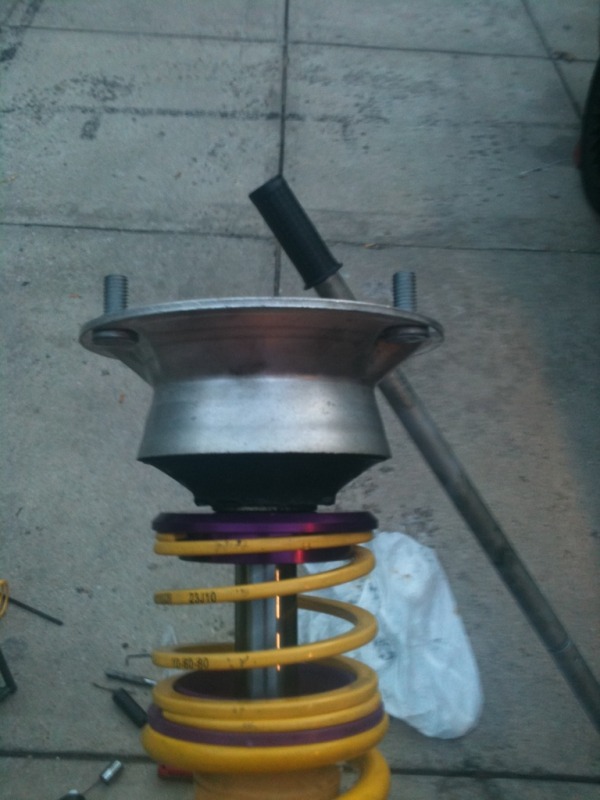 Now its time to reinstall everything! Start by sliding it into place and securing the 3 13mm nuts from the top. Now attach the wheel hub and its 18mm bolt. Then reattach the end link and the tie rod. You may need a torx to keep the tie rod from spinning. Now torque them to spec. (top three are 13ftlbs, 18mm is 74, and end links are around 18-20 I believe).
Time to admire your work! 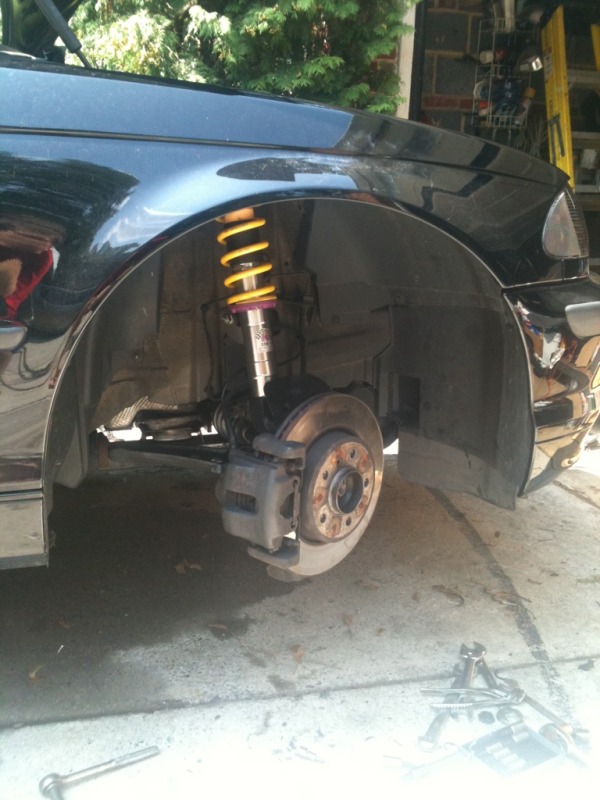 Put on your wheel and lower it. Careful as my car was too low to pull the jack out. I had to use my OEM jack on one side first to pull the floor jack out. Then lower it all the way. The hardest part is over.

REAR STRUT AND COIL REPLACE
Break your lugnuts, choke the front wheels, and jack it up using the U-Brace near the rear differential:

Use your jack stands.
Locate the strut and remove that bottom bolt. I think it is 18 or 22mm. The rear trailing arm will pop down significantly. Now go into your trunk and remove the lining and such until you see the top of the rear shock mounts. I replaced them as well. Unscrew them (16mm?) and the strut will fall out. Don't throw out as you need the RSM and the gasket. Do this for both sides, because for some reason when both struts are out, it is easier to remove the springs. Now push the rear trailing arm down hard and pull/twist out the coil. It helps to have a friend.

Take the old top perch and use it as the bottom perch for the new coil: 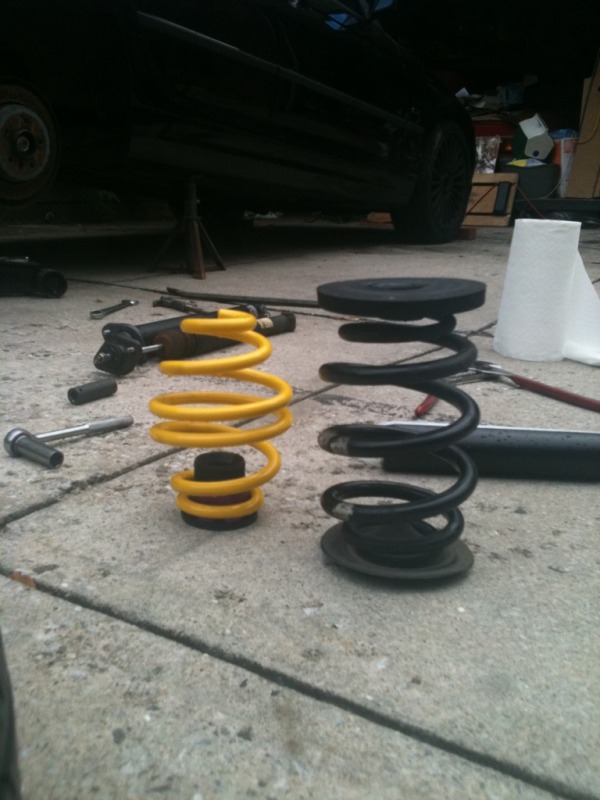 Its easier to put them back in as they are slightly shorter than the stock coils. Put them in.

Initially I set it up like this, but that IS NOT CORRECT: 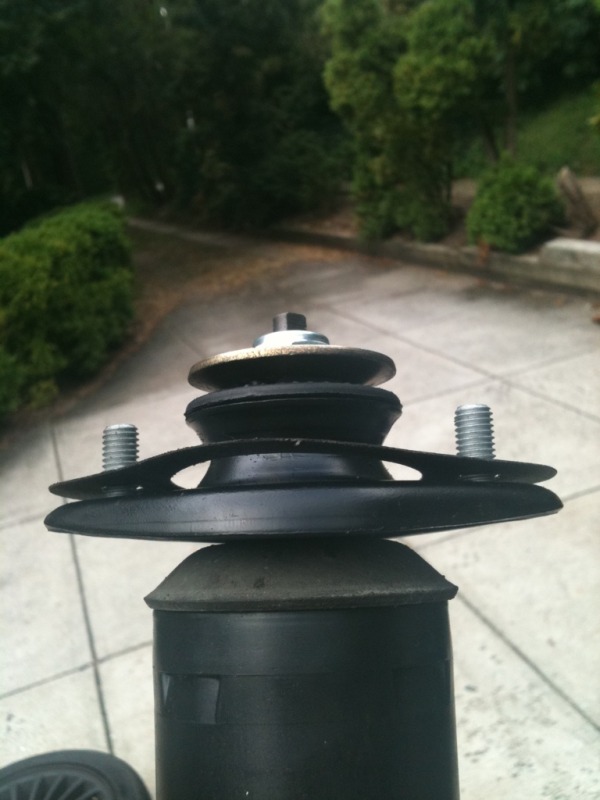 What you need to do is use the washer on the top, but not the silver cup washer on the bottom, nor do you need the smallest washer. So all in all, you need the RSM, the gasket, top washer. Hold the strut up and screw it in to the trunk. Next I used my jack to jack up the RTA so I could screw in the bottom bolt of the strut to the hub. Make sure you use the included washer. 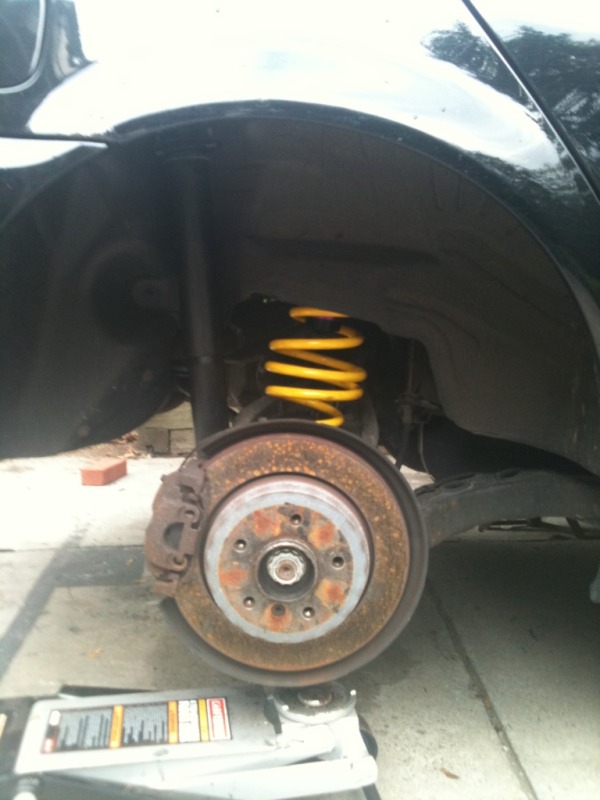 Put the wheels on, lower your car and you are done! [minus all the adjusting to you tastes and an alignment] 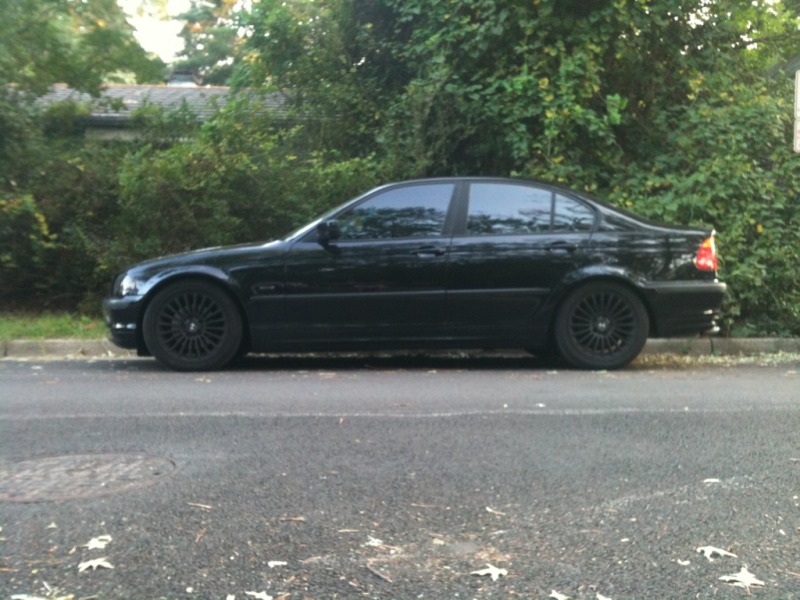 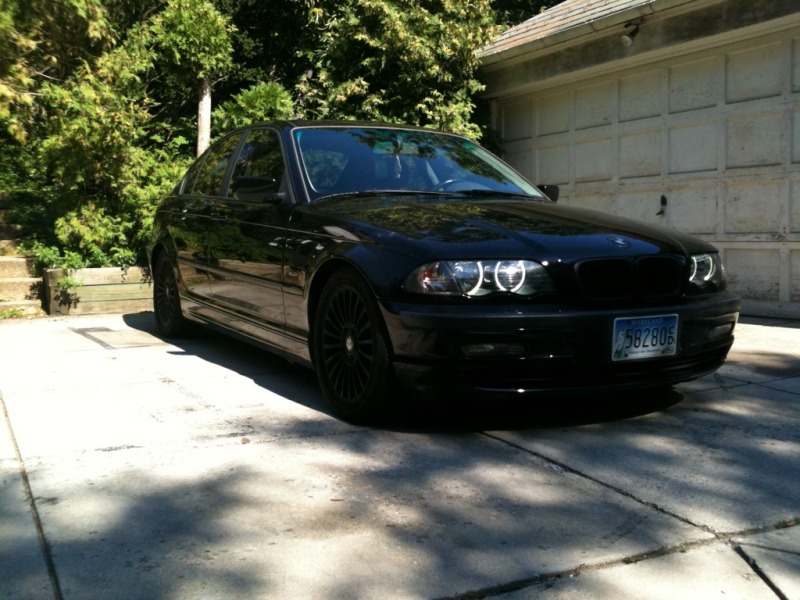 Now after the install, at first I thought, ""Wow, this ride is extremely smooth, I feel more connected to the road [I had replaced practically my entire front suspension though] and it doesn't even feel worse than stock!""  After driving it for a while, in a ton of conditions, yes, the ride is much more stiff. It is however not a big deal, I don't mind it a bit. The steering is super legit although this is just my DD so I don't push her.

Things of note: You have to jack up the car and remove the front wheels to adjust the height. The rear, you have to actually take out the spring. SO that is kind of a pain. My front camber is at -2*.

So far I absolutely LOVE these coilovers, and have zero buyers remorse whatsoever! Call up Jason at ModBargains for a great deal. He can work with you to find a price that will work!

Click here to view the review thread on E46Fanatics